Three major players command great power and influence over the Exiled Lands, each pursuing various goals to shape and exploit the region for their own gain. So far, they’ve been able to stay out of one another’s way, but as is always the case, the ambitious and powerful always find a way into conflict. Each of them are actively recruiting Exiles to their cause, and the Exiles themselves may rise to become major powers, themselves. Who will you serve? Will you stand apart? How will you shape your destiny, and with it, the fate of the Exiled Lands?

Korseh is a mysterious power from the distant West, wielding strange magics and performing profane and perverse rituals in the darkest recesses of the Exiled Lands. This powerful sorcerer seems content to stick to the shadows and avoid direct interaction with most others, content to interact with the world through numerous intermediaries. Korseh and their followers seem to be bolstered and empowered by otherworldly powers, creating fear and destruction in their wake when they set to undertaking a particular path. Their tasks tend to involve delves into corrupt, evil places haunted by the dead, and their followers are often rewarded with magical items or accompanied by powerful undead champions bound to Korseh’s will.

High above the clouds, from far-off mountains in the South, Mako chose to enter the Exiled Lands as a form of self-seclusion, in order to break away from the confines, the politics, and tribulations of civilization. Believing the world of men to be a corrupting influence that takes a person apart from their true, natural existence, he set out to escape the Riddle of Steel, the Riddle of Flesh, and instead has embraced the Riddle of Silence. Since then, many exiles and gnostics alike have found Mako’s secluded monastery and have chosen to join him in his quest of self reflection. Those who have joined the monastery have found themselves carrying out tasks to master themselves, to undermine the burgeoning civilizations trying to take root in the Exiled Lands, and and finding themselves rewarded with a deeper mastery and understanding of themselves, tapping into unheard-of potential for mere mortals. 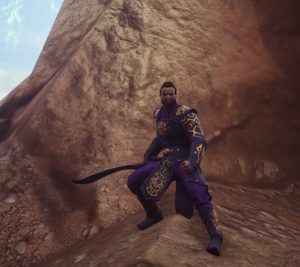 Peace is a lie. Civilization is an illusion. Power is simply a plaything for mortal egos. Wealth, though. Wealth is eternal. Everyone remembers Atlantis. Everyone knows the names of Thule and Mithras and the growing power and glory of the great Conan. So, too, will people know the name of Alexander! This thief-turned-mercenary-turned-merchant has brought his company of miscreants to the Exiled Lands to exploit its material wealth and recover long-forgotten artifacts and treasures, in order to grow his own pile of wealth of wonder.

His tasks often involve sending the Exiled into places too dirty or too dangerous for him to send himself or his lieutenants, letting the Exiled trade their lives and risk for riches and comforts otherwise unavailable in the Exiled Lands.

To mention the power players of the Exiled Lands without mentioning the wandering tribes and clans of Exiles who’ve put their mutual distrust aside in order to band together for greater strength and stability would be a huge disservice. Even though they are bound to this region, their connection to the land, their mastery of its wilds, and their continued survival makes them a rival for any of the Lords of Exile, and many who refuse to swear fealty to one of these three personalities can also find themselves rising to similar levels of prominence and power, pursuing goals of their own, be they freedom from Exile, power, or profit of their own!